Worst Drought of the Decade on St. John, USVI – Save water

St. John and other Caribbean islands are struggling with a severe drought. The last proper rain (as in a whole day, night or weekend of rain) on St. John fell in February. Then virtually no rain at all until June and since then only a few showers usually not lasting more than a few minutes with a bit more rain in 2 or 3 nights. St. John seems to also have gotten less rain than St. Thomas where it was for example raining cats and dogs on the day of the country music festival, not so on St. John.

Someone told me that once it has not rained for a long time there is so much hot, dry air over the island that it is virtually parting the clouds and make them move elsewhere. That sounds logic but I don’t know how much truth there is to it.

It is however a fact that the Caribbean is suffering from the worst drought in at least five years, maybe a decade and the forecast for the hurricane season is quiet, which means less rain. The last drought was in 2010 and this one is predicted to get worse.

National Weather Service precipitation data shows the month of July saw about 2/10 of an inch of rain, which is 2.35 inches less than normal. Temperatures are 1.3 degrees warmer than normal. There is little relief in sight as the dry air will continue to limit the shower development. 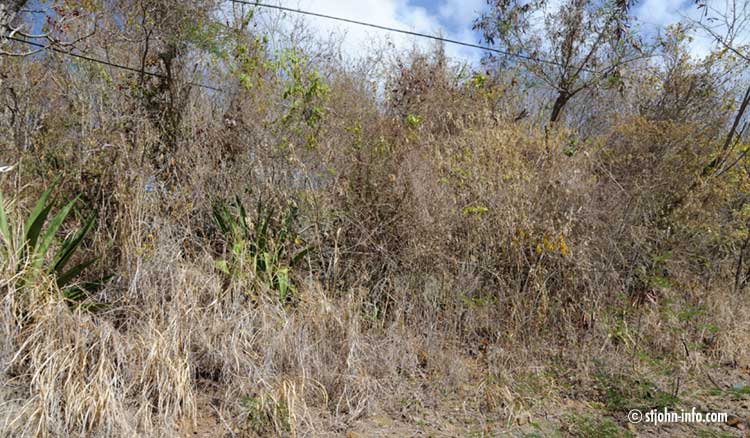 From Puerto Rico to St. Lucia, crops are withering and reservoirs are drying up, cattle is dying, trees are dying. The farm sector in the Caribbean has lost more than $1m in crops and tens of thousands of dollars in livestock, said Norman Gibson, scientific officer at the Trinidad-based Caribbean Agricultural Research and Development Institute.

The drought has also created a sharp increase in bush fires on St. Croix. 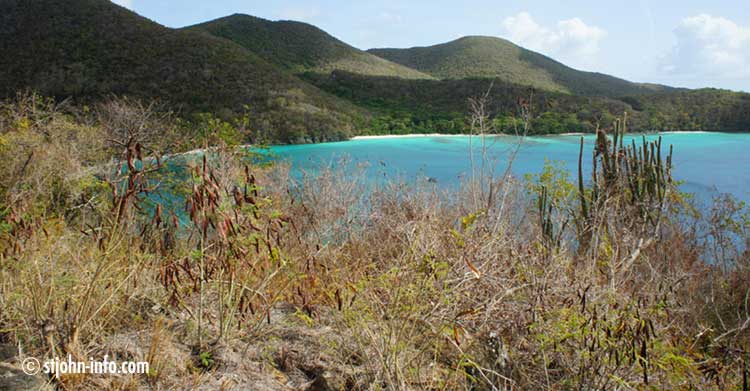 Everything looks brown and sad (picture above: view from peace hill) and even the normally greenest grass in the world at Caneel Bay Resort looked very brownish green today. Only the Flamboyant trees seem unimpressed by the drought and still blossoning in shiny red and orange, but according to Agricultural Commissioner nominee Carlos Robles even they are in danger and the drought could spell the end for some of the trees.

“There is not a lot of food for the non-native deer and there is less and less water” Said virgin Islands Nationl Park Chief of Resource Management Dave Worthington about the St. John Deer Population. “They are not neeling over the but the deer are stressed”. The islands donkey’s as well as Iguanas are also under duress. 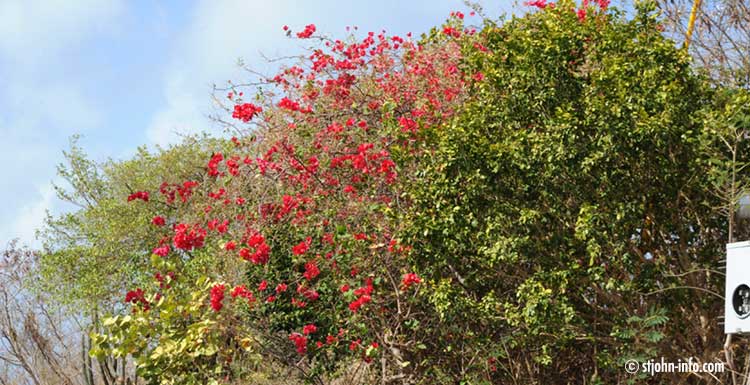 St. Thomas has unlimited water supply thanks to the desalination plant.

“Our source is limitless,” Hodge said. “We have the ocean we use for desalinization. So there is no production problem associated with rainfall with how me make water.

“We can meet the demand if it exists. There is no issue on our end in meeting demand,” Hodge said. “Right now, we have more than enough production. We have almost 50 percent more production than we have demand.” says V.I. Water and Power Authority Executive Director Hugo Hodge Jr.

They are converting about 3.3. million gallons of water per day.

Even if St. John is not likely to run out of water, it still has to be delivered to houses and villas via water trucks, which causes pollution and noise and of course the plants in the nature that are not manually watered will continue to suffer. 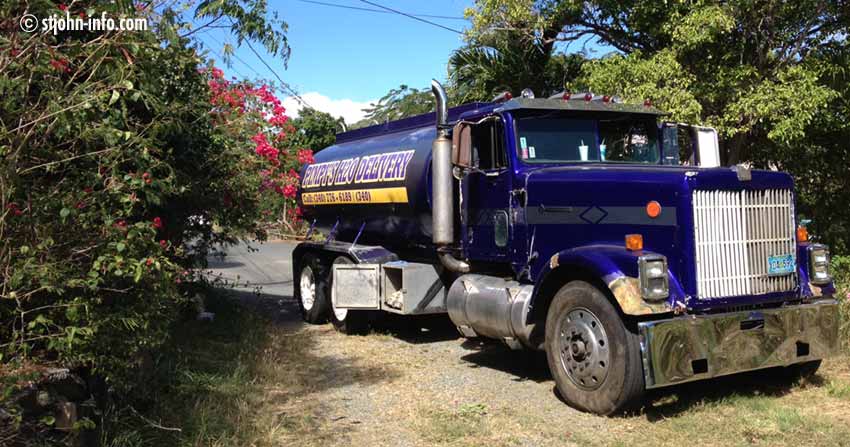 After we had to have water delivered to our house twice in one month, we have become experts in water saving, here are some tips.

What are your tips for saving water? Post below!

But now back to the flamboyant trees which still keeps St. John looking colorful.

The tree originated in Madagascar. It has fernlike leaves and howy orange-red blooms. It is also known as flame tree or peacock flower.

According to Daily News, “the flamboyant tree population in the territory exploded after Daily News founder Ariel Melchior Sr. took to the air in a plane piloted by Jack Monsanto and showered St. Thomas with flamboyant seeds.” Differing accounts place that flight in 1947 or 1950.